As part of our larger Hike-Play project, we're going on walks in parks and forests around Lenapehoking, communing with our neighbors of other species, and talking with each other about the climate crisis. In this project, we expand the definition of theater to mean an intentional space created for people to pause their daily lives and immerse themselves in reflection, joy, emotion, story, or thought. 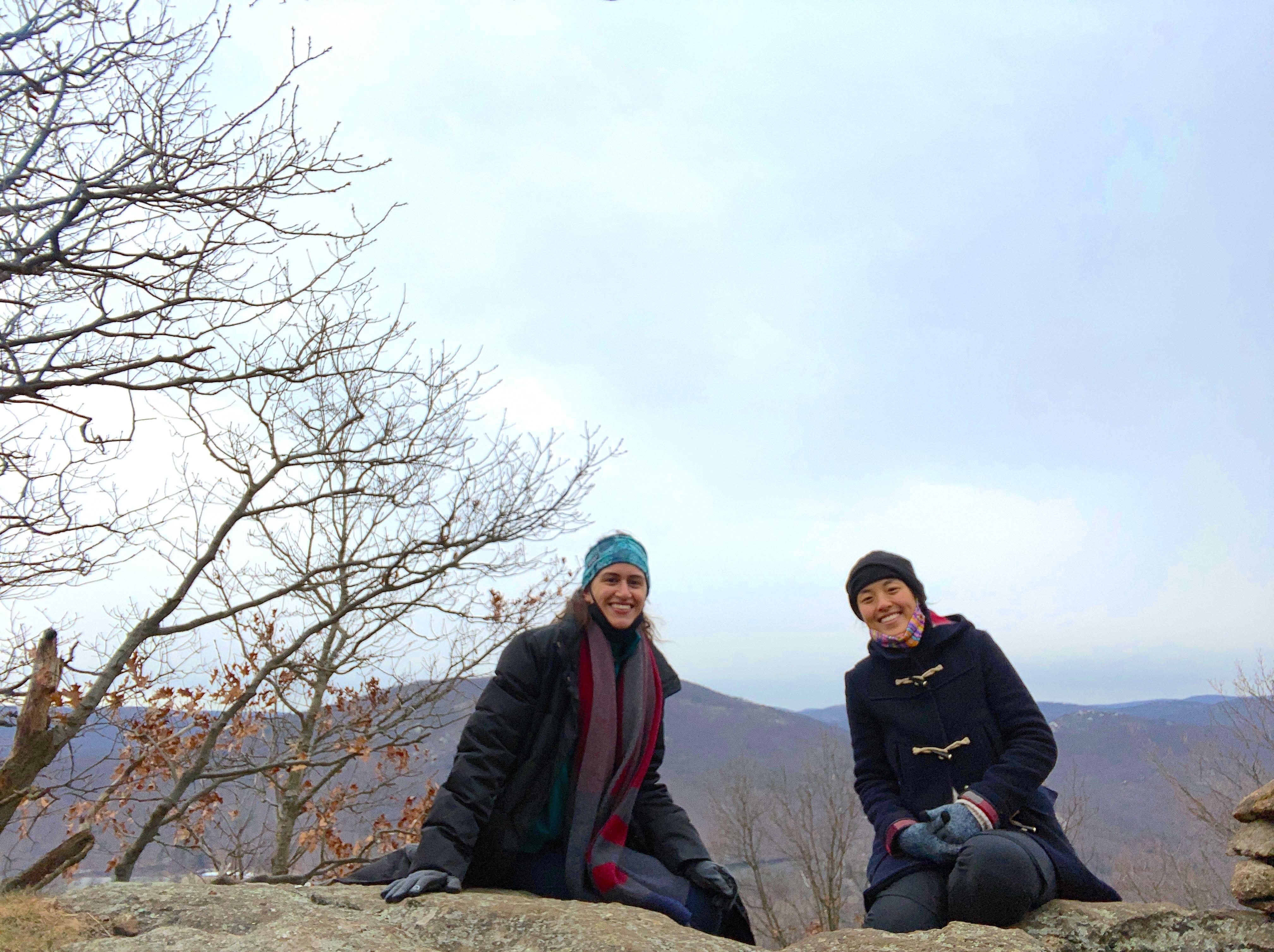 “Do you think it’ll be too warm to wear my scarf?” Noelle asks.

“I mean, I always get warm halfway through the hike when I do that,” I say.

She wears the scarf.

I’m with SHC Core Member Noelle Viñas, about to climb Anthony's Nose. Neither of us have been here before. We aren’t sure what to expect, except that it’s on the shorter side, steep, with a sweet view of the Muhheakantuck, otherwise known as the Hudson River, at the top.

As we clamber on, we pause often to check-in with each other: “Are we going the right way?” Noelle remarks that she doesn’t have a lot of the hiking literacy that other people seem to have, even though her parents took her and her siblings on family treks in the Appalachians and Shennendoahs growing up. I tell her I didn’t learn things like trail markers until my 20s. Maybe it’s that we’re both migrants, raised by families with roots in other places. We both remember the manicured Northern Virginia suburbs our families eventually settled in as being full of abundant nature. A pond with geese! Trees! Paths that led to creeks! Compared to the big, crowded, foreign cities we were born into, they felt like wilderness. We talk about how the climate crisis and environmental degradation show up tangibly in the bodies of our loved ones and in our own constant, low-heat anxiety. When I ask her about change and how expansive she thinks it can be, she is pragmatically hopeful. She believes entirely new systems can replace what we know, but she wants to know how. With radical change, she’s always seeking the how. As I listen to Noelle, I am buoyed by a feeling of trust. I trust that she, along with all the artist changemakers, will do the work that we are so especially called to do; the hard work of making what is presently unimaginable, real. 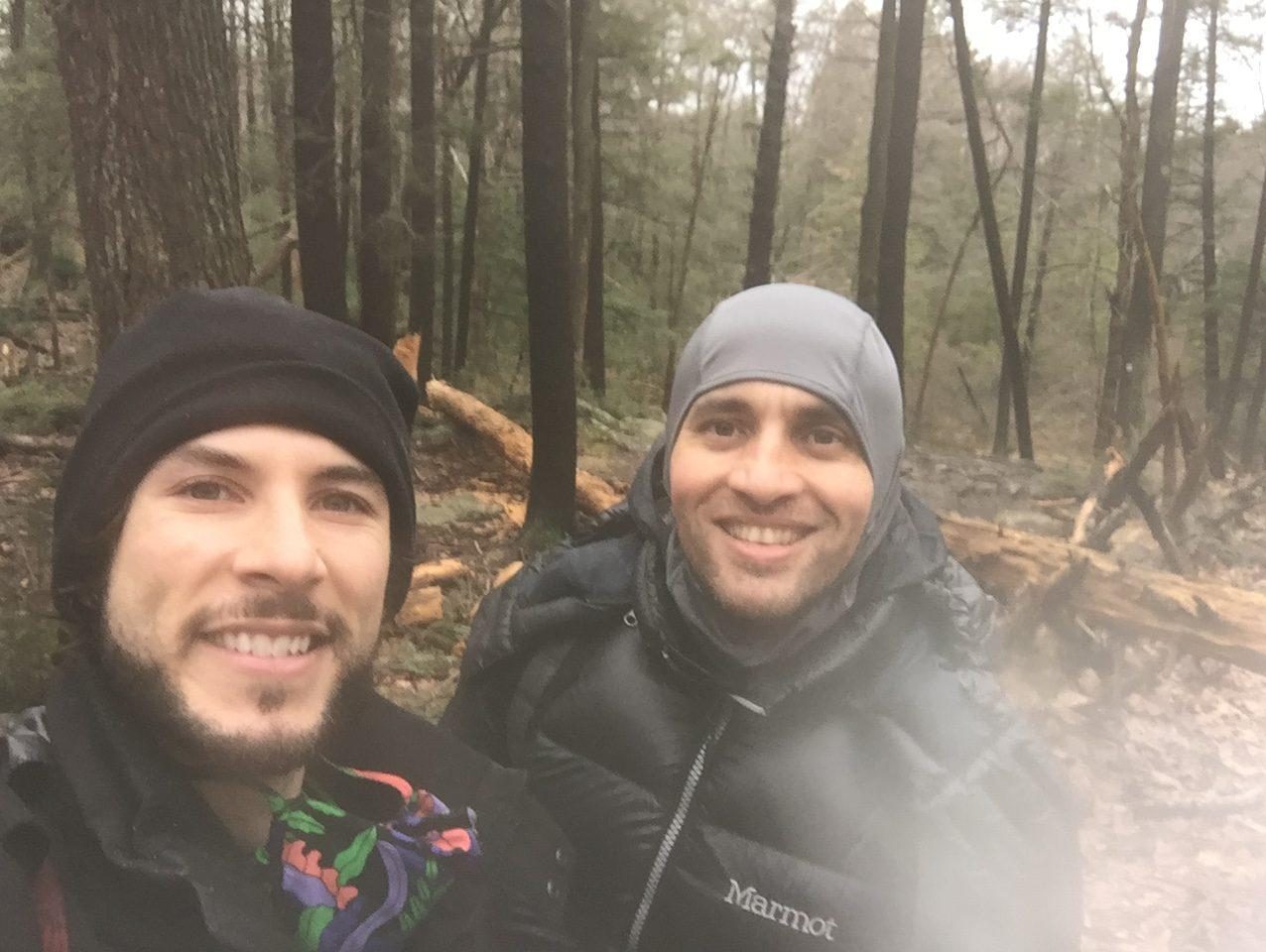 “The happiness other people experience from hope I get from knowing that everything on Earth is insignificant compared to the cosmos. The universe is beautiful. There are so many other planets we haven’t destroyed.” It’s the second time I’ve hiked with Superhero Clubhouse Core Member Sergio Botero through Harriman State Park. Last summer we lost the trail and acquired a tick; today’s walk in the cold and clouds is less dramatic. The sound of cars on Harriman’s main road fades as we pass through leafless deciduous trees into a world of misty evergreens. It’s the perfect setting to ask Sergio about his least favorite topic: hope.

“And no matter what we destroy on earth, we haven’t done that much to the microbial world. There are so many tiny ecosystems under every rock.” Sergio, an ecologist, biologist, and primatologist who now works in business, is a big-picture person. He is disconcertingly fatalistic about the climate crisis and holds little faith in humanity. To truly avoid mass extinction and other catastrophes, he says we would have needed to maintain a planet of “200 million people; 20 cities; everything else is wilderness.”

Sergio’s disenchantment with humanity is countered by his deep compassion for the other species. He was raised in Columbia and studied monkeys in the Amazon. His current studio apartment is a jungle of sun-fed and cold-blooded creatures. When I ask how he would reinvent New York City if he was Mayor, his answer included no cars, way more green spaces, and “legalize pet crocodilians.”

We walk around the rim of a little canyon, admiring the frozen water below. From this height we can see a dam-made lake in the distance, a feature of both natural beauty and human interference. “I’m a forest snob, because I grew up with so much biodiversity. But I like this area.” 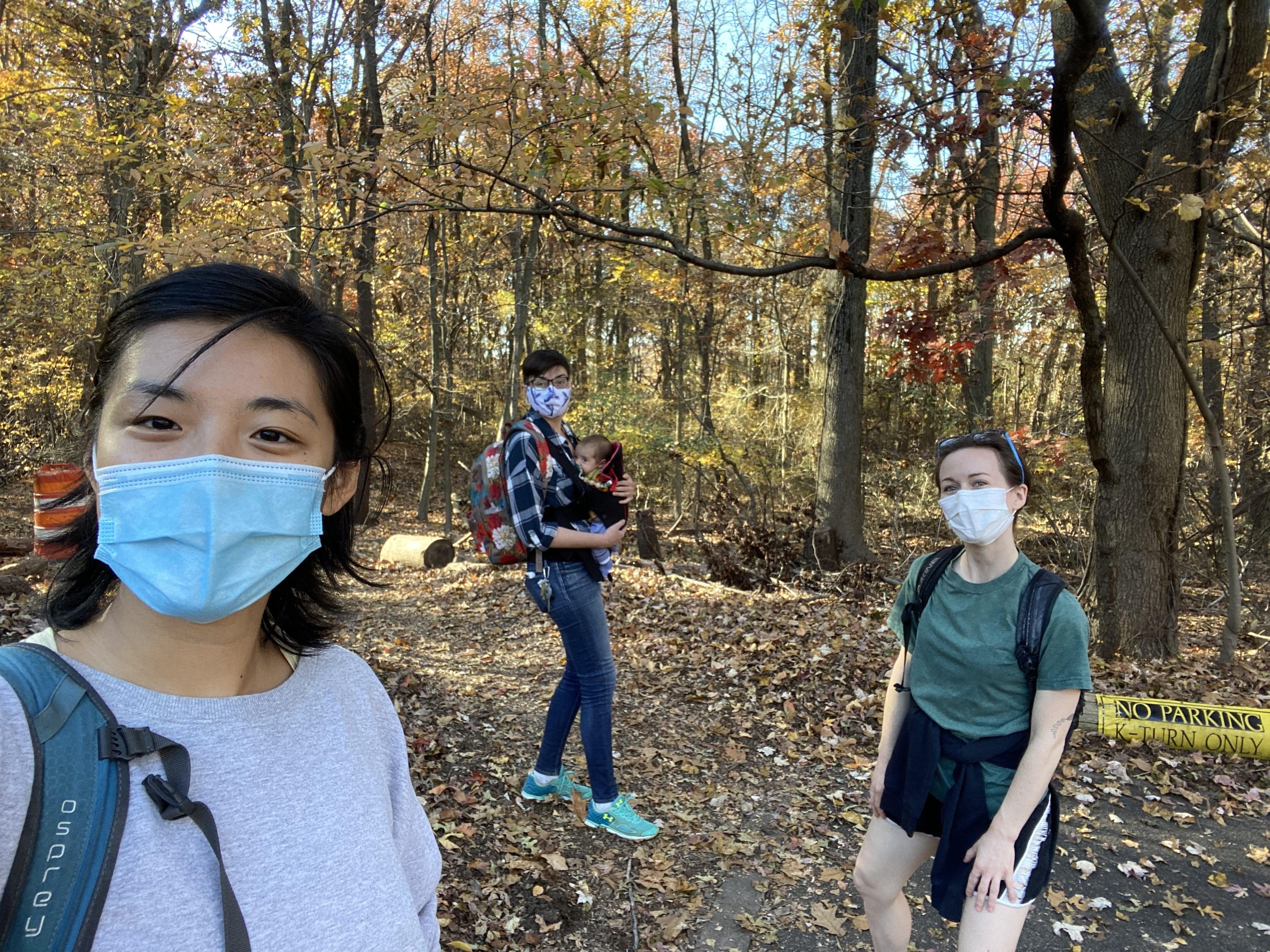 It's a sunny afternoon in November, and I'm on a soothing, meandering stroll in Staten Island’s Greenbelt Nature Center with Superhero Clubhouse Core Members Celia Gurney and Megan Paradis Hanley, and Gabriel (Megan’s infant child). We walk in the sweet relief of Election Day 2020 having passed and glimmers of brightness appearing on our horizon. Through our conversation, Megan and Celia discover similar upbringings in the Pacific Northwest, always being in view of the mountains, accustomed to park hangs and summers in water. Both grew up with relatively benign relationships to the natural world around them. It wasn’t until leaving their childhood homes that they discovered more rigorous ways to engage with nature, and started plugging into networks of people fighting for climate justice. We share hopes about the future; how we want to use our crafts (comedy, theater, activism) to move hearts and minds and nourish our communities. And, we share dreams for building homes and families in an increasingly uncertain, unstable world. Gabriel’s presence emphasizes just how tangible those challenges are for a new parent. The questions of how to guide and provide for a new being in this world are a vivid reflection of the big questions that face us all, children or no children: How do we make choices that serve our greater community while also taking care of our own well-being? How do I get the most joy, love, pleasure out of life, while staying small and humble enough to not make a hugely negative impact on the world around me? Near the end of the hike, Gabriel wakes from a nap and stares up, eyes saucer-wide, mesmerized by the sun streaming through Fall leaves. We pause for a moment, watching him watch the light.